I Watched a Movie

My husband Kirk and I sometimes have a competition.  We see who can pick the stupidest movie.  We call it “Stupid Movie Night”.  Pretty original, don’t ya think?  At the end of each one, we will either say, “I win”, or “you win”.  It is our way of watching something without having to think.  There is so much on TV these days that just isn’t worth watching.  Most of it seems filled with political rhetoric, or opinions that don’t match my own.  Most regularly scheduled programs, including the news, don’t even find their way into our home.  It depresses and sometimes angers me, to see just what the world is trying to get me to agree with, or how they are trying to desensitize me.

Last night was a different story.  I found an older movie that I don’t remember watching when it came out in 1995.  It was titled, “Dead Man Walking”.  This was not a stupid movie.  It was gut-wrenching.  I’m not here to debate the death penalty.  It is none of my business who does or doesn’t agree or disagree with it.  Let’s put that aside.

This movie tore me up.  I somewhat liken it to the feelings I had when I found out Robin Williams had taken his life.  I am not doing my job.  There was a nun in the movie, who, simply because she was asked, wrote to a death row inmate.  Through correspondence, she then was asked to visit, and then through visits, this inmate asked her to help him.  This finally led to her being his spiritual counselor through his last days.  This character did a better job loving the labeled unlovable than I ever have.

I know it was a part that she was playing.  She got paid to play this part.  However, God can use anything to convict or to get our attention.  She went and met with this man.  Over and over she went.  Even when he disrespected her.  Even when he disrespected her beliefs and values and faith.  Even when he blatantly said and did things he knew were hurting her.  Things that made others angry that she was helping him.  She received actions and vocalizations from others, with grace.  She was a picture of Christ-like behavior.   She continued to ask the people who were angry with her, how she could help them.  She continued to speak the truth in love to the inmate.  (Spoiler Alert) In the end, the inmate confesses and apologizes and makes peace with this world and with God.  Yes, he did a horrible thing, but the beauty was that God loved him, forgave him, and even though he died, in my eyes, his character went to heaven.

Who am I to even imagine that I get a say in who receives grace and mercy and who doesn’t?  We are called to go and make disciples in Matthew 28:19 and 20 and to Love our neighbor as yourself in Matthew 22:37-39.  We are to love and to tell about Jesus.  How many of us actually do this?  I have to be honest, I don’t usually even ask for opportunities to do this.

Let’s see if we can change our world.  It is never too late to try to reach the lost.  I am going to ask you all to hold me accountable.  Come and ask me if I had many occasions to share just what Jesus has done for me.  Ask me if I have asked God to give me daily chances to talk about Him.

This is my resolution. 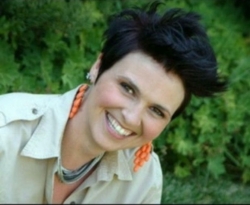 Bonnie Smith
Bonnie Ellen was born in 1975 and raised in Dayton, Ohio.She and her husband Kirk bought a home in Crossville, Tennessee in 2018 and moved here permanently in 2019. She and her husband have four children between them.A son Josh and three daughters, Sarah, Gillian, and Meredith.Two grandsons, Max and Connor, and another grandbaby on the way. One day Bonnie was driving down the road and she felt God point out Grace Community Church.He said,“That is the One!”They have attended Grace since the week before Easter 2021.Bonnie is the Worship Director at Grace.