What group or groups do you belong to? Are you male or female, Christian or non-Christian, US citizen or from another country, old or young, married not married, union, non-union, Republican or Democrat? I happen to be an older woman married to a man who is the mother
of two sons. I am also a Christian living in the US who happens to be left-handed and wears glasses. I wonder… Is there a group for left-handed, older, Christian, married women with 2 children and bad eyes living in the US? I haven’t heard of one but if you have let me know. My point is that while I may be all of these things, I don’t want to be defined by just any one of
these things. They are all parts of the persona that makes up the identity of “Lisa”. I don’t want to be just known as John’s wife or Chris and Sean’s mom for example. Those descriptions on their own don’t tell my whole story, none of them alone define my true essence. I am the sum total of all my experiences and my character traits – good and bad, all these things inform my decisions and opinions. Some folks today, however, want us to be defined based solely on current popular ideology and whether we are for or against the current trends in the culture and society.

The current wave in this country is to follow the popular group think mentality – meaning you identify more strongly as a member of a group rather than as an individual. Let’s face it we all want to be
liked. We can all remember how difficult those middle and high school days were when we wanted so badly to fit in with the popular group. When my son Chris was 13, he came home from a school dance and told us about an experience he had there. He described how the most
popular kid was in the middle of a circle of friends and how there was an outer circle of kids trying to break into that inner circle to be associated with those popular kids. We asked him where he stood in that description. He said he was in that outer circle. To his credit, at 13 years old he understood what was going on. Those kids were desperately jockeying for position to be seen in the circle with the popular kid to elevate their social position in the hierarchy of school popularity. We thought that was a perfect metaphor of the way it is in the real world too and
we use it often to this day. At the time we told him he would be lucky if he kept one good friend that he would stay in touch with from high school once he graduated and to keep that thought in perspective when deciding who his real friends were and how important conforming and fitting in were compared to just being true to himself.
We appear to be experiencing so much of this in the world these days. It seems you must be a member of the current popular groups now to be counted. We are living in a post-modern world where there are no longer any universal truths that we can all believe in. We are
expected to no longer trust in the evidence of our own eyes and to disregard what we “know” to be true. Instead, we are encouraged to keep quiet and to go along to get along. This country was founded on the Judeo-Christian belief in the one true God and the tenant’s espoused in the Bible. Specialty interest groups, however, are the norm these days, and those members participate in “identity politics” meaning that my individuality is lost, and my identity matters
first, as a part of the groups, I belong to not as an individual with my own thoughts and the freedom to speak those thoughts but must subscribe to the groupthink of the collective – basically the current popular kids.
I don’t think that’s what God had in mind when he created us. He created us in his image, and he gave us all free will with unique minds of our own to think, speak and act for ourselves. We can choose to follow his ways or to turn our backs on him and conform to the ways of the world. He gives us the choice. He loves us and wants us to choose him, but he does not force us
to do so. Choosing God’s ways is the only thing that makes sense to me in a world that seems so chaotic where so many are willing to forsake the principles of the Bible in favor of their own self-interest, group ideology.

Paul tells us in Romans 12:2 “Do not conform any longer to the pattern of this world but be transformed by the renewing of your mind. Then you will be able to test and approve what God’s will is – his good, pleasing, and perfect will.” We need the moral guidance provided to us in Scripture to show us the righteous path we
should follow. God’s ways must be central to our thinking and our actions. If the groups we want to belong to aren’t in keeping with the Universal Truths of the Bible then we ought not to be afraid to speak up about it and to have the courage to go our own way and forge our own path if that is what it takes to be in God’s favor – even if it means being the unpopular kid here on Earth.
“Beloved, do not imitate evil but imitate good. Whoever does good is from God; whoever does
evil has not seen God.” 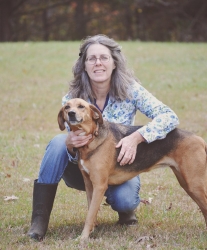 Lisa Podrecca
Lisa and her husband John have been living in Crossville since 2009 and have been attending Grace for almost as long. They are both originally from Massachusetts where they raised their children. They now live on a farm with a bunch of animals. They love to ride their motorcycle exploring the beautiful backroads of TN. Lisa spends a lot of her time now sewing and making things for her granddaughter.